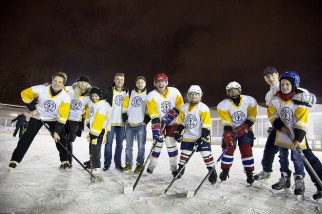 Paul, Jacqui and Ben Brown continue their global quest with #50Sports in 50 Weeks to inspire the world to get off the couch. While winter in Europe can be cold and harsh, the Browns are making the most of the icy conditions and in Russia they took on two pursuits iconic to the region, Ice Hockey and Dog Sledding or Mushing. Here’s their account of the first with Ice-Hockey Week…

“The more our journey unfolds the more we discover interesting ways to get off the couch and keep active. Some sports are easy, simple and safe, some are more challenging…and then there’s ice-hockey! Many sports combine multiple skills such as Water Polo where for example being able to swim strongly is an advantage. With Ice Hockey, if you did not grow up ice-skating you’ll be at a distinct disadvantage as skating skills are paramount to the game. Don’t let that stop you though as this sport has so much going for it it’s worth the effort and the steep learning curve.

Our experience started with news that our original hockey mentor was unavailable at late notice due to team commitments. 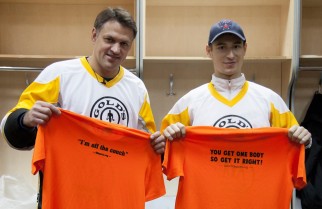 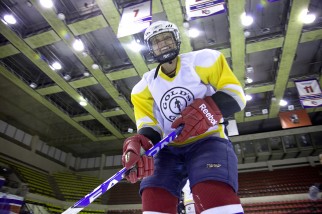 First up, we needed to kit out in our hockey uniforms and protective gear and that itself was an experience. Once again our hosts Vladimir Grumlik and Paul Kuebler had it all organised and as their Moscow Gold’s Gym is just a short walk to the local skating rink, we got prepared at the club but the highlight for us was when our hosts presented Jcqui, Ben and I our own personalised Ice Hockey Jerseys.

It took us almost an hour to fully suit up and apparently most serious players have to do that twice a day, so this is one sport takes serious preparation. 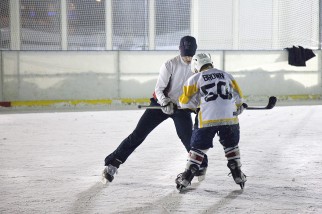 On the ice at last, Slava lead our first session and did a sensational job of getting Jacqui, Ben and I working the skates and looking like pros (well almost). We focused on balance, learning to transfer our weight from leg to leg while sliding on the frozen slippery surface. Fit as we might like to think we are, our legs quickly felt the unfamiliar workload and once we got going we also worked up quite a sweat. 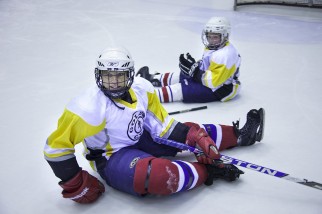 Ben spent a lot of his time falling down, getting up again then falling down some more. Thanks to his safety pads and helmet no harm was done. 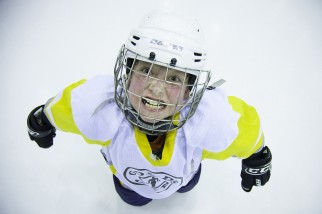 Like the little champ he is, Ben never complained, in fact he laughed harder and harder with each tumble and like all falls in life he also learned from each so by then end we could all get around the ice with some degree of confidence. 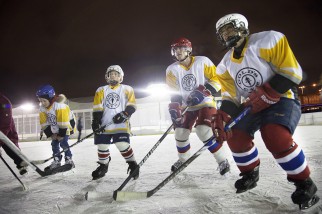 Once we had the basic skating skills we were introduced to our Hockey sticks and the illusive puck. We discovered having a stick in your hands actually improved our skating rhythm and balance. The puck also brought a new focus and we all had a great time learning how to pass, shoot goals and circle around while controlling that little black disc. Day one done, we all went home tired and sore but proud of our progress. 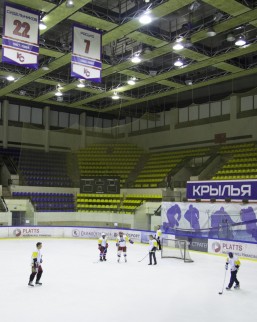 Session two saw our mentors Yuri and Slava combine to give each of us highly individualised coaching on and off the ice. Yet again our kind hosts had organised everything, not only an NHL superstar to be our coach but they even arranged an entire ice arena exclusively for our personal use so we had the ultimate experience, one most hockey players could only ever dream of.
We ran more intricate drills, with line runs, circle skating, puck passing and of course everybody’s favourite, goal shooting.  It all climaxed with a very fun game including our hosts and local friends to make it all the more enjoyable. 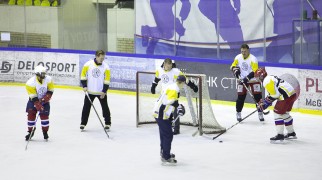 Here we were, a week ago have never tried the game and now we were playing along-side several of the game’s greats and most passionate enthusiasts…what a great way to get off the couch.

To wrap up Ice-Hockey week we set of for our most important task of all in Russia, our next Get It Right talk, this time at prominent Moscow School 235 (Yes they use numbers to identify their schools in Russia). As English is not a commonly taught language here it was to be our first fully translated presentation and for that job I had a very special assistant. 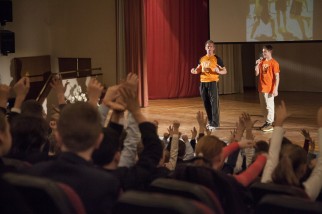 Our host Paul Kuebler’s 17 year old son Erik has been raised in the USA but speaks fluent Russian and he did an excellent job on stage helping me inspire the audience of several hundred kids and teachers to make better choices and live an active life. They all got really got involved and everyone had a blast. 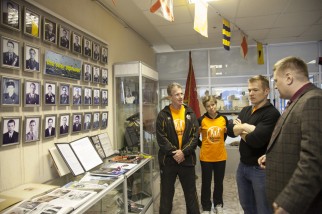 After the talk, the School director showed us through some fascinating museums onsite that highlight Russia’s proud and impressive history in the pioneering of space. The school also has many great Olympic Athletes and Sports heroes mentoring their students, so we know our work and our message has not fallen on deaf ears. 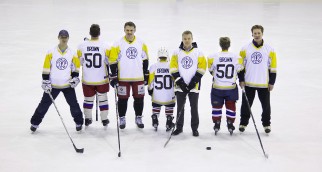 With Ice-Hockey week done, that’s 10 sports and 10 weeks in the bag. Now just 40 sports and 40 weeks to go and our next stop will be Kostroma in Russia’s north for the enchanting but highly challenging sport of Dog Mushing, just in time for Christmas. What an amazing journey and yet another thrilling way to get the world off the couch, one sport at a time.  See you next blog.” Paul, Jacqui and Ben. Read Also : Importance of sports